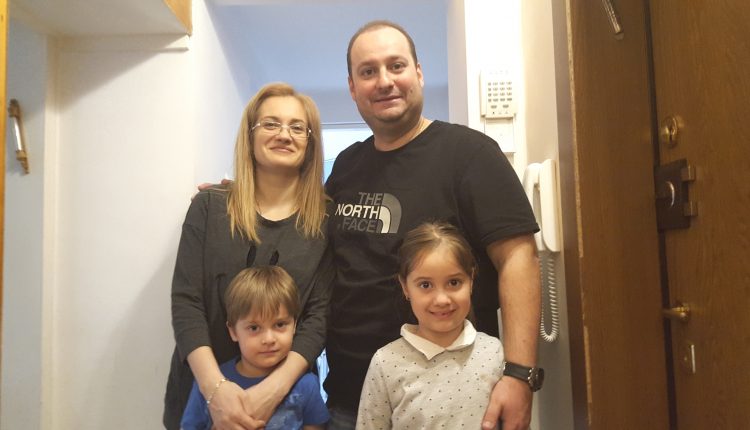 The Bulgarian Jewish community is small. While more than 50,000 Jews lived in that country right after World War II, some 48,000 made Aliyah around 1948. Today, up to 5000 Jews are left. Imanuel Marcus visited an active Jewish family in Sofia.

Noam Zhivkov-Baruch, his two children and his wife might be a typical Jewish family in Bulgaria, in the sense that they are an integral part of the community within the organization Shalom. Noam, who just turned 40, was a Hebrew teacher at Shalom’s community center from 1996 to 2001. He prepared members who wanted to make Aliyah, meaning those who were about to move to Israel.

“Now I’m part in several programs for my kids,” he says. Those include the family program Mishpacha. “It is a nice program for parents with children aged 0 to 18.” The father of two is happy about the seminar for families, called Bereshit, which Shalom organizes every year, somewhere outside of Sofia. Another seminar one his family likes to take part in is Limmud Keshed. This one is for all Shalom members.

“It is very important to be together as a community,” Noam Zhivkov-Baruch says in excellent English, “with the support of Shalom.” His son David is five years old. He goes to the Jewish kindergarten, while Mira, his seven-year-old sister attends Dimcho Debelyanov School, which has a Hebrew language program.

When David was born, he had a major kidney problem. Doctors at Bulgarian hospitals told Noam and his wife, a kidney had to be removed. “But he was a tiny baby.” So Noam Zhivkov-Baruch went to Israel. “I have many friends in Israel. Also they have the best doctors. I was told they could save David’s kidney, and surgery would take place in Israel.” Since the family knew the operation was not going to be cheap, they needed help. The community, Shalom, started a collection. “They helped me,” Noam says.

When it was time for surgery, the doctor in charge turned out to be of Bulgarian origin. He broke the good news to the family: They would use a modern technique, which would be better for David, who was by then a toddler. “Today, David is perfect,” his father says today. And there was even more good news. The surgery turned out to be a lot less expensive than anticipated.

“This meant I did not need the money. So I donated it to another member of the community who badly needed it for health reasons.” Noam Zhivkov-Baruch was, and still is, very thankful to the Jewish community in Sofia. “This is a good example, which shows how strong it is and how people help each
other.”

Both children, David and Mira, will attend the new Jewish school Shalom is currently planning. “I just received an invitation to be part of the big discussion about that school.” Noam and his wife can’t wait for the new school to open. “We hope it will open as soon as possible. This is definitely the most important project of our community. Of course we are thankful to the Ronald S. Lauder Foundation, ORT, the JDC and everyone involved.”

Even among the most active members of the community, there are mixed marriages, between Jews and
spouses who are not Jewish. Noam’s wife, Anni, is not Jewish, at least not by origin. “But she is more involved than I am.” Noam says she even wants to convert. “But this would mean we would have to go to Israel for at least a year, and that would disrupt every thing we are doing here. But I’m sure it will happen.”