Bulgaria: Get Your Kicks on Trakia Freeway 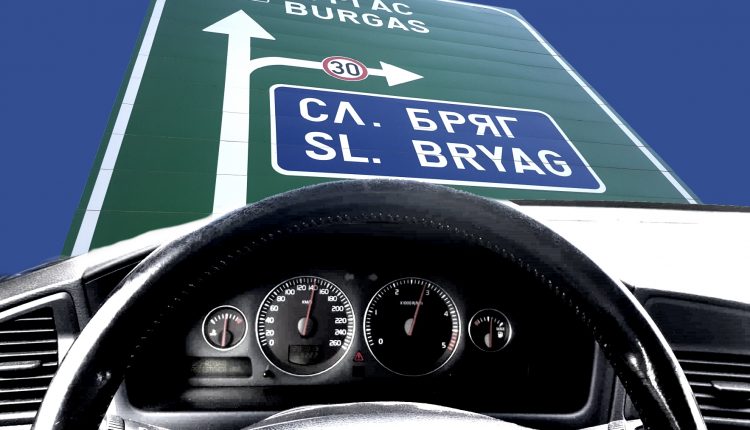 The mission was simple: Take four people from Sofia to Burgas, at the Black Sea coast. Then return to Sofia immediately. Should you choose to accept this mission, pick up your passengers at 7:45 a.m.. Operation “Hot Wheels” was a go.

So, the 2.4 liter Diesel was fired up. There were some 774 kilometers to go. The plan was to be back in Sofia at 2 p.m., but that would depend on the weather. According to the forecasts, most of western Bulgaria was under a Code Yellow weather warning, due to excessive rain.

Trakia Freeway (the British say Trakia Motorway) was relatively full this Saturday morning, between Sofia and Plovdiv. Why in the hell would there be this much traffic? And why was there a never ending convoy of Audis, with weird stickers on their windows?

It looks like the “Audi Club” or a similar organization had organized some kind of an excursion. It took 20 minutes to overtake all of them, since there must have been 200 Audis. Behind the tunnel, up there in the mountains, we had gotten them all. Finally.

Trakia Freeway is actually a miracle. It took 40 years to build one of the two most important roads in Bulgaria. Only five years ago, almost to the day, the last stretch, between Yambol and Karnobat, was completed. Up until then, anyone driving to the Black Sea from Sofia, or in the opposite direction, had to use country roads.

The communists needed five years to construct the first 10 kilometers of Trakia Freeway, from 1973 to 1978. Eight years later, in 1984, Sofia and Plovdiv were finally connected. Bulgaria just has a different pace. At least it used to.

Today, the trip from Sofia to Burgas takes three hours by car and around twice as much time by bus, far better than 8, or 12 hours, respectively.

But if this wasn’t Bulgaria, long stretches would be closed, because of their terrible state. Between Yambol and Stara Zagora, the right lane is hardly usable. Before that part was constructed, nobody had thought about the combination of summer temperatures of up to 45 degrees and the weight of huge trucks (yes, lorries, I apologize, or apologise), and what it would do to the road.

Shaken, not stirred. That is how drivers and passengers feel on the right lane in that region. Apart from the inconvenience, those corrugations are actually dangerous. There should be a speed limit of 60 to 80, on that stretch.

On the other hand, things are indeed happening. For instance, a 60 kilometer-stretch close to Plovdiv, which was in an even worse state, was just repaired. At the same time, relatively new parts of the road are already damaged, because of the low quality approach chosen.

This Saturday morning, only some vehicles overtook me, while I was driving at the top speed allowed, 140 km/h. With cars worth 250 average monthly salaries in this country, which is not an exaggeration, some ignorant drivers raced by at 180 to 210 km/h.

Usually those macho or mafia guys (or both) in their 7-series BMWs, big Audis or S-Class Mercedes’ are “much closer than they appear” (as it says on rear view mirrors in America) within seconds, since they believe they are on the Circuit de Monaco.

They would use their flashlights and try to push traffic rule-abiding drivers out of their way, which is even more dangerous than the damaged freeway itself. By the way: Bulgaria has the highest road death toll in all of the European Union.

At 11 a.m., we arrived in Burgas. The connector between Trakia Freeway and Burgas, was supposed to be under construction, but the renovation of the southern side was already complete.

Another three hours later, at 2 p.m., I was back in Sofia.

It’s mid-June. Younger kids in Bulgaria are already on their long summer holiday. So are 12th-graders, who did their Matura (the equivalent of A-levels in Britain or high school diplomas in the U.S.) in May. But traffic was moderate anyway, maybe because we left early, or because people usually do not hit the beaches until July.

Shaky or not, it is good to have Trakia Freeway. By now there are even enough gas stations. There is McDonald’s, KFC, Happy and Subway.

One driver who was on the road on Saturday seemed to have won her driver’s license in a prize competition. In her huge Mercedes SUV, she used both lanes at the same time. First, she overtook us, doing around 160 km/h. Then she slowed down to 120 km/h, in order to accelerate again afterwards. Back and forth. This would go on for ages.

An Audi 80 driver, who did not seem to be part of the herd mentioned earlier, hit that Freeway without number plates. The next one blew a huge smoke cloud out of his exhaust pipe, which stank pretty badly, around 5 kilometers behind him. And quite a few drivers did not seem to know anything about the concept of crawling like a snail on the right lane, while overtaking on the left one.

Watch it, at all times. The secret is to get there in one piece.

The World Traveller’s Perspective of Bulgaria