Borissov at Sofia Synagogue: “Saviors should be role models to our generation” 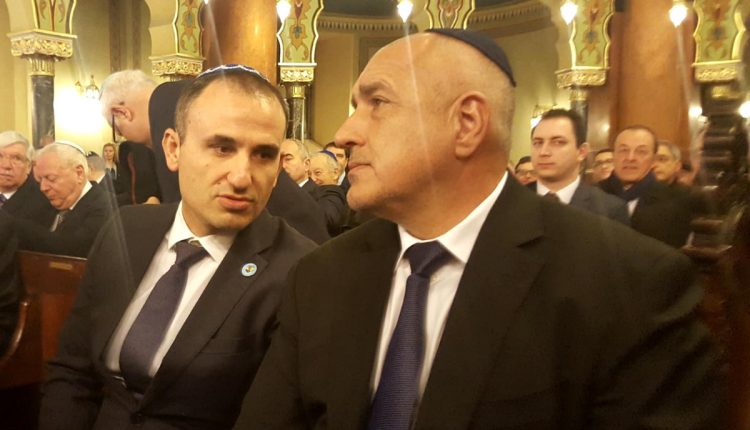 Hundreds of Bulgarian Jews welcomed many visitors at Sofia Synagogue on Saturday, for the presentation of the new book “Bulgarian Jews: Living History”. The book tells the compelling story of the Jews in the country, over the past 2000 years, while shedding a light on the present and future as well.

It was published by Shalom and written by Clive Leviev-Sawyer and Imanuel Marcus. The English version is already available at Shalom Sofia and Sofia Synagogue. Shortly it will be offered at Amazon Europe too. A Bulgarian version will follow in May of 2018.

During the event in Sofia, Prime Minister Boiko Borissov said, Bulgaria was sorry about the fact that more than 11,000 Jews from Macedonia, Thrace and Pirot had been deported and killed by the Nazis, 75 years ago. At the same time, the Bulgarians who had contributed to the salvation of the Jews from within Bulgaria “should be role models to our generation.”

Ronald Lauder, the President of the World Jewish Congress (WJC) thanked Borissov for the government’s efforts to curb antisemitism. He mentioned a Nazi march which recently took place in the Bulgarian capital, saying the participants were fascists disguised as nationalists, with a direct link to the darkest part of history.

Regarding the Holocaust, Lauder stated Jews had been murdered in all of Europe, “but not here in Bulgaria. This has fascinated me for decades.” Borissov seemed moved during Lauder’s statements, according to observers.

Ronald Lauder also honored the leadership of Shalom, the organization of the Bulgarian Jews. “As President of the WJC I just want to say how much we appreciate Shalom under (its President) Alexander Oscar.”

Dr. Oscar honored both Borissov and Lauder with Shalom’s Shofar Award and said he was very exited about the new book his organization had published.

Eno Itzhak, an 85-year-old Bulgarian Jew who made Aliyah in 1948, thanked the Bulgarian people on behalf of the Israeli delegation he was part of. “We are brothers”, he said. “We will make sure our children and grandchildren will always know what happened in Bulgaria.”

As part of the commemorations for the 75th anniversary of deportation and murder of Jews from regions administered by Bulgaria during the Holocaust, a delegation headed by Borissov will travel to Skopje, the Macedonian capital, on Monday.

The Nazis deported and murdered 98 percent of the Macedonia’s Jews, more than 7,000 of them.

Ronald S. Lauder: “The Jews Will Never Forget the Bravery of the Bulgarians”