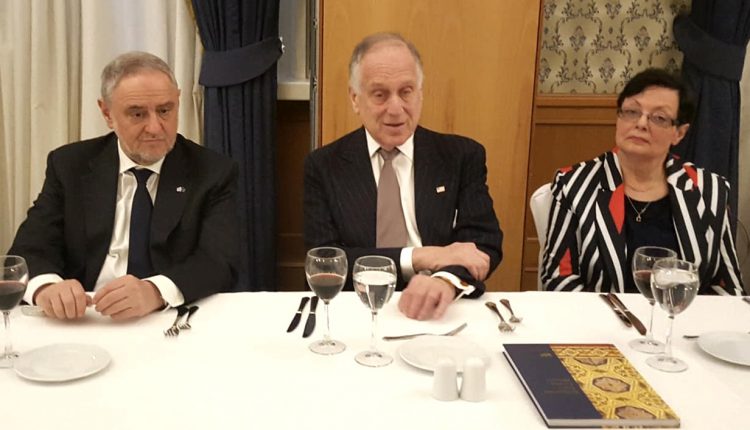 Ronald S. Lauder, the President of the World Jewish Congress (WJC), and the WJC’s Chief Executive Officer Robert Singer came to Bulgaria this morning. At a lunch with representatives of Shalom, the organization of the Bulgarian Jews, Lauder was presented with the first copy of the book “Bulgarian Jews: Living History”.

The book, published by Shalom, will be released at Sofia Synagogue this evening. It tells thousands of years of history, including the rescue of the Bulgarian Jews in 1943, and the deportation of more than 11,000 Jews from regions administered by Bulgaria, including Thrace and Macedonia. At the same time, the new release looks at the present and future of Bulgaria’s small but thriving Jewish community.

Because of Ronald Lauder’s extensive help for the Bulgarian Jews since the collapse of communism, both as President of the WJC and as the founder and Chairman of the Ronald S. Lauder Foundation, Shalom’s President Alexander Oscar announced he wanted him to be honored with the Stara Planina Order, which is the highest order Bulgaria has to offer.

Both Ambassador Lauder and Robert Singer were interested to hear about Bulgaria from their lunch guests. The subjects covered included potholes on the country’s roads, the country’s mafia, but also the mostly pro-European government Bulgaria has and recent developments.

Lauder told his guests that one of the main roles of the WJC was to build bridges between Jewish communities and the governments in the respective countries. Regarding the Bulgarian Jewish community, he was impressed. “We need communities like this one. That is why we are coming back here”, Lauder stated.

The spreading nationalist movements all over the world were another discussion subject over lunch at a nice Sofia hotel. Lauder said the question was how to handle them. The WJC was looking into this phenomenon, which would have long-term consequences.

Regarding the President of the United States, Donald Trump, Lauder said he had gone to school with him. Trump was not a far-right person, but Americans who had voted for him were.

A large educational project Shalom is working on was discussed as well. Ronald Lauder, whose foundation has supported countless schools in Eastern Europe, and is providing extensive help for this one, expressed some wishes regarding the project’s setup.

Photo on top of page (from left to right): Robert Singer, Ronald Lauder, and Becca Lazarova of the Ronald S. Lauder Foundation.

Ronald S. Lauder: “The Jews Will Never Forget the Bravery of the Bulgarians”