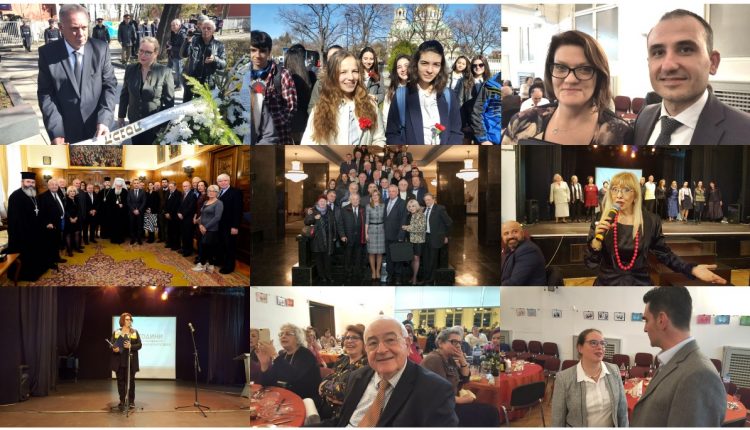 A delegation consisting of 25 Bulgarian Jews, most of whom have been living in Israel since 1948, took part in an event at the Thanksgiving Memorial in Sofia this morning. During the ceremony, 11,434 Jews from Macedonia, Pirot and Thrace murdered by Nazi Germany during World War II were commemorated.

The delegation also included many members of the Diplomatic Corps, including the Ambassador to Bulgaria, Irit Lillian. She said, the salvation of the Jews from Bulgaria had been “a ray of light in the darkness” and reminded the participants that “hate speech, racism and antisemitism have not been eradicated.” Ambassador Lillian stated that indifference always benefited the aggressor.

With Knesset member Aithan Broshi, she laid down a wreath in honor of the murdered Jews. Broshi is a Knesset member for the center-left Zionist Union, and Chairman of the Israeli Friendship Group with Bulgaria.

Goran Sadikarijo, the Chairman of the Holocaust Fund and Holocaust Memorial Center in Macedonia, was there too. He is one of 200 Jews left in Macedonia today. The Nazis deported and murdered 98 percent of all Jews who had lived there, while Macedonia was governed by Bulgaria, during World War II.

Rabbis from Bosnia, Greece, Israel, Romania, Turkey and the United States were part of the delegation too. This evening, they will be part of a big Shabbath service at Sofia Synagogue together.

Members of Shalom, the organization of the Bulgarian Jews, attended the event. They included Victor Baruch, a 97-year-old writer and journalist.

Shalom’s President Alexander Oscar said at the ceremony, a vast majority of Bulgarians had decided to save lives. “They cited the principles of the Turnovo Constitution, they cited the words of Levski, they cited the very truth that they knew Bulgarian Jews to be their  loyal compatriots, they poured scorn on anti-Semitism as a foreign import, poisonous and alien to these lands.”

“They understood that to be silent in the face of evil is to become an accomplice to it”, Dr. Oscar stated.

After the ceremony, the group entered the Bulgarian Parliament building. As guests of the President of the National Assembly, Tsveta Karayancheva, they were part of the presentation of a book, in Bulgarian, about the salvation of the Jews from Bulgaria proper.

Some delegation members were scheduled to meet President Radev in the afternoon, on this most active day during the visit, so far. Radev had been scheduled to attend the ceremony at the Thanksgiving Memorial, but cancelled for unknown reasons.

At the Ministry of Foreign Affairs in Sofia, the Israelis and other guests had followed an invitation of Minister Ekaterina Zaharieva on Thursday. She welcomed them by saying the Bulgarian authorities were “doing the right thing to prevent all forms of intolerance, xenophobia and discrimination. You can rely on us.”

Zaharieva said Bulgaria was fighting hate speech actively. She expressed regret that, as in other countries, there were “separate manifestations of anti-Semitism in Bulgaria, but they are carried out by isolated and marginal elements of Bulgarian society.”

Foreign Minister Zaharieva also listened to the accounts of the delegation members, who told her what they remembered from back then, around 1948, when they left their birth country Bulgaria, in order to start new lives in Israel.

Alexander Oscar, the President of Shalom, the organization of Bulgarian Jews, thanked Minister Zaharieva, Deputy Minister Georg Georgiev, and her other deputies, for the efforts in fighting the rising antisemitism in Bulgaria in the past year.

Dr. Oscar also mentioned Ambassador Plamen Bonchev, Co-Head of the Bulgarian Delegation to the International Holocaust Remembrance Alliance. He thanked him for his dedication and commitment in combating antisemitism, and for his efforts regarding the preservation of the memory of the victims of the Holocaust.

Patriarch Neofit, the Head of the Bulgarian Christian Orthodox Church, had received the delegation earlier on Thursday. Alexander Oscar expressed the “deep gratitude” of the Bulgarian Jews for the role of the Church in the rescue of the Jews in Bulgaria proper, during “the darkest period in human history.”

“We teach our children to remember that decent Bulgarians saved not only their brothers and sisters of Jewish origin, but saved the Bulgarian society as a whole”, Alexander Oscar stated.

Patriarch Neofit, who received the Shofar Award from Shalom, said the Orthodox Christians had always felt love and appreciation for the Jews. “The friendship between us must remain, because we will never forget what our predecessors did for the rescue of the Bulgarian Jews.”

In the evening, the Israeli guests joined a dinner with members of Shalom, the organization of the Bulgarian Jews. It was one of those rare occurrences during which Bulgarian Jews who stayed in Bulgaria after the war, and others who made Aliyah back then, were in the same room. They did not mingle much, but felt each other’s presence.

Ino Itzhak, a 81-year-old Bulgarian-born Jew is part of the delegation. When he was 12, he and his mother left Bulgaria for Israel. He told this publication, his memories of Bulgaria were alive. Back then, after the war, the main issue in Bulgaria had been uncertainty.

Finding food and clothing had been tough, Itzhak said. All people he knew, including his family, had been Zionists. “Not making Aliyah was not an option.”

More about Ino Itzhak is part of Shalom’s book “Bulgarian Jews: Living History”, which will be released tomorrow, on March 10th, 2018.