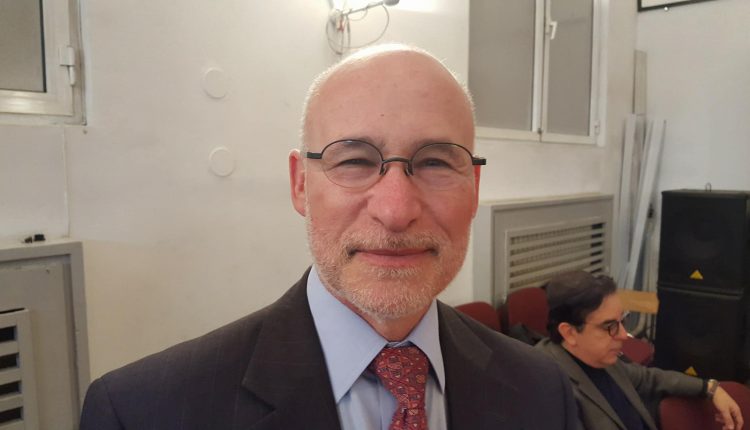 Arthur P. Nemitoff is Senior Rabbi of the Congregation B’nai Jehudah in his home town of Kansas City. On his home turf, he heads his congregation and provides services at the synagogue. Also, he supports individual members, including dying people and their families. On top of that, he works with Jewish congregations abroad. Bulgaria is one of the countries Rabbi Nemitoff visits frequently, and he is in Sofia right now. Imanuel Marcus spoke to him.

Magazine79: You just spent time in Bulgaria, and it wasn’t your first visit. What is your overall impression of the country, or the city of Sofia?

Rabbi Arthur P. Nemitoff: Having traveled to a number of post-Communist countries, there are elements of Bulgaria that are common to many of them. No doubt there is a need to rebuild the infrastructure. However, that is literally “bricks and mortar.” What is more important – for me – are the people and the country. The people are truly wonderful. Every time that I encounter someone while in Bulgaria, they go out of their way to be helpful and friendly. I spend most of my time in Sofia. I have spent many hours running and walking throughout the city. I love how the ancient and new sit side-by-side. It is a wonderful experience for me to get lost along side streets and to walk into all kinds of small shops and peer into alleyways to see what secrets they hold. While I haven’t had a lot of opportunity to travel around the country, I have been to the Rila Mountains, and the Rhodope Mountains, and of course Vitosha. I love the mountains and the countryside. I’m looking forward to exploring the north and especially the Black Sea area.

Magazine79: Over here, you cooperate with Jewish organizations. Your own congregation in Kansas City actually supports projects down here. What are the main contributions?

Rabbi Arthur P. Nemitoff: The Jewish Federation of Greater Kansas City is a partner with the American Joint Distribution Committee, working with the Bulgarian Jewish community. That partnership goes back almost two decades. Through the years, it has included visits of students, professionals, and volunteer leadership both to Bulgaria and to Kansas City. It has involved financial support from our Kansas City community for projects that have involved education for children and adults, social service support for the elderly and those in need, as well as expanding opportunities for Jewish life in Bulgaria. Our Federation is the “central address” for our Kansas City Jewish community. We are about 20,000 Jewish individuals, comprising some nine synagogues, a Jewish Community Center, Village Shalom, which is our home for aging Jewish individuals, and a variety of Jewish social services. My own congregation has been generous in giving me the time to visit and work with the Bulgarian Jewish community.

Magazine79: Your congregation in Kansas is a Jewish Reform congregation, meaning a more progressive one. How easy or hard is it to export that concept to Bulgaria, or even to Israel, the Jewish homeland?

Rabbi Arthur P. Nemitoff: The secret is not to export anything. The goal is to learn what has been done in other places and see if – and how – it can be translated into something authentic for the Sephardic traditions of this community, educationally, socially, and of course spiritually. What can be adopted and adapted is looking at Judaism from a variety of perspectives and giving individuals the opportunity to find their entry into Judaism through that particular doorway. In my congregation, we call it and IJP, an Individualized Jewish Path. Such a concept can easily be translated, whether in Bulgaria or Israel, to permit individuals to find their way into meaning Jewish living.

Magazine79: Why is liberal Judaism important?

Rabbi Arthur P. Nemitoff: History demonstrates that Judaism has always changed in response to the vagaries and exigencies of the time, wherever Jews have lived. Thus, we must be prepared to do so today, based on the realities in which we find ourselves. That is not “liberal” Judaism. It is Judaism. Over the last two centuries, which is not a long time in terms of Jewish history, we have divided ourselves into denominational camps. Perhaps it is time to see all of us as Jews, and recognize that each of us needs to find the path that speaks most directly to him or herself in order to fulfill his or her Jewish destiny.

Magazine79: In 1943, virtually all Bulgarian Jews were saved, because courageous, non-Jewish Bulgarians stepped in, when Nazi Germany wanted to deport and murder them. How well known is this story of courage, principles and love in the United States?

Rabbi Arthur P. Nemitoff: The story is known, although not widespread. The wonderful book “The Lemon Tree” by Sandy Tolan tells the story in a compelling fashion. I know that many have read the book. What I can tell you is that I share the Bulgarian heroism that resulted in an entire community being saved from the Nazis as often as I can. It is an important story, a headline, if you will, and not a footnote.

Magazine79: You also cooperate with Jewish organizations and congregations in Serbia and Estonia. What is the situation of the Jews in those countries?

Rabbi Arthur P. Nemitoff: I am not an expert on European Jewry. However, my experience has taught me that Jewish communities in countries that were part of the former Soviet orbit continue to struggle, both positively and with concern, to build their unique Jewish heritages after a 40+ year hiatus, which followed the Holocaust, and itself decimated so many communities. These places, the Czech Republic, Romania, Serbia, Estonia, and a dozen other countries, are entering their third decade of independent Jewish living. Like so many young people who approach reaching 30 with trepidation, these communities are asking themselves who they are, what they want to be, and how might they best get there.

Magazine79: The Bulgarian Jews are a relatively small minority. There are also the Bulgarian Roma, Bulgarians of Turkish origin, and the Bulgarian LGBT community, a minority not based on origin, but on sexual orientation. How do you see the situation of those minorities in Bulgaria?

Rabbi Arthur P. Nemitoff: Again, I am far from an expert on these topics. And I view them from an American lens. That said, it is clear that minorities throughout the world today are facing difficulties in having their voices heard. In Judaism, what the Torah teaches us is clear: We must be the voice of the widow, the orphan, the elderly, the “stranger” in our midst. We are taught that over and over and over again. Who is the “stranger?” It is the “other,” the one different from us. It is simply the minorities of the world who are oppressed and persecuted. We are commanded to protect them and to stand up for them. Why? Because the Torah teaches, “we were slaves to Pharaoh in Egypt.” In other words, because at one time, we were the “other.”

Magazine79: Thank you, Rabbi. Have a good trip back to Kansas.

This interview was published first in July of 2017, on The Sofia Globe. Rabbi Nemertoff just returned for another visit to Sofia for the 75th anniversary of the rescue of the Jews from Bulgaria proper.