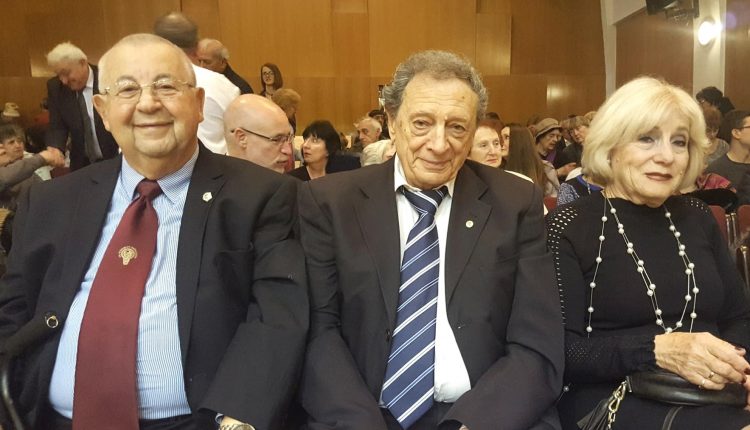 Exactly 75 years after the events of 1943, during which Bulgaria defied Hitler’s Nazi Germany by refusing to deport its Jews, even though the country was part of the so-called Axis, a delegation of 25 Bulgarian Jews from Israel came to Sofia today. They thanked Bulgaria, while honoring the thousands of Jews from Thrace and Macedonia, regions governed by the Bulgarian kingdom at the time, who were deported and murdered.

The guests, most of whom made Aliyah in 1948, meaning they moved from their birth country Bulgaria to Israel back then, are taking part in several events scheduled for the next five days.

One additional guest arrived the United States of America: Arthur P. Nemitoff, Senior Rabbi of the Congregation B’nai Jehudah in Kansas City, comes to Sofia quite often. His congregation, and Rabbi Nemitoff personally, have helped the community of the Bulgarian Jews a whole lot in the past two decades, and still are.

On Wednesday evening, the guests were invited to a concert at the National Academy of Music, named after the late Pancho Vladigerov, one of the greatest Bulgarian composers ever, and a saved Jew himself.

Before the concert commenced, Shalom, the organization of the Bulgarian Jews, honored the Bulgarian Medical Association. Seventy-five years ago, its members stood up for their Jewish compatriots, by sending a letter to the National Assembly, in which they demanded a cancellation of an order to deport Bulgarian Jews to Nazi Germany.

Shalom’s President, Dr. Alexander Oscar, said when Bulgaria had been faced with the so-called Defense of the Nation Act, antisemitic legislation based on the notorious Nuremberg Laws of Nazi Germany, “the Bulgarian Doctors Union joined many other professional associations in making their objections known. Their stance was courageous.”

“The letter from the Bulgarian Medical Association to the President of the National Assembly survived, at the State Archives. On just a little more than two pages, the letter diagnoses the ailment and recommends the cure”, Dr. Oscar continued.

“In powerful language, it rejects the notion that somehow Bulgarian Jews represent a threat to the ‘purity of the nation’ and its professions. It expresses concern that this law would damage the good name of Bulgaria, and the prestige of its tolerant and inclusive people.”

Harry Sessler, the head of the delegation of Bulgarian Jews from Israel, thanked Bulgaria for the courage and determination it showed, when courageous non-Jewish Bulgarians made their voices heard, 75 years ago.

While the Jews from Bulgaria proper were saved, 11,343 Jews from Thrace, Macedonia and the town of Pirot were deported and murdered by the Nazis, in Treblinka and Auschwitz.

For the guests, the Symphony Orchestra of the Music Academy played excerpts of Gustav Mahler’s Fifth Symphony, which was very impressive. More pieces followed, including two by Giuseppe Verdi and one by Pancho Vladigerov himself.

On Thursday, the delegation from Israel and Rabbi Nematoff will meet Patriarch Neofit, who heads the Bulgarian Christian Orthodox Church. The late priests Kiril and Stefan, who stood up for their Jewish compatriots in 1943 as well, and played a major role in their salvation, will be honored at that event.

Meetings with Bulgaria’s Foreign Minister Ekaterina Zacharieva and with President Roumen Radev are scheduled this week too. So is a trip to Plovdiv.

On Saturday, March 10th, 2018, “Bulgarian Jews: Living History”, a new book about the complete history of the Bulgarian Jews, will be released during an official ceremony after a Shabbath service at Sofia Synagogue. The delegation from Israel will be there.

The Bulgarian “Righteous Among the Nations”