Sofia Synagogue: The Place To Be 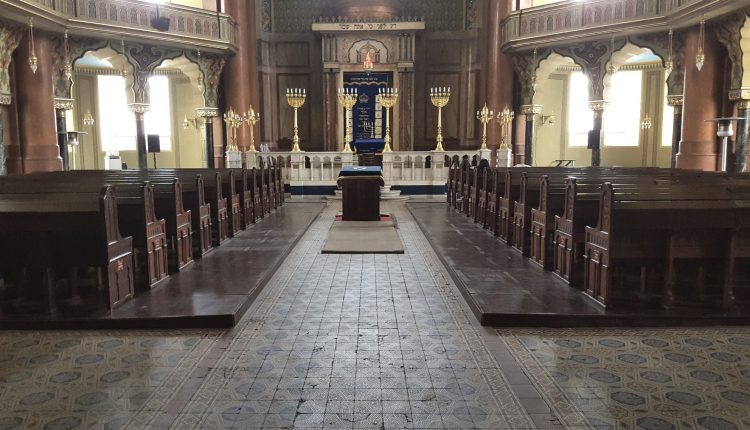 The impressive Sofia Synagogue was inaugurated in 1909. It took four years to erect this temple, which is the third largest synagogue in Europe, right behind Budapest’s Great Synagogue and the Portuguese Synagogue in Amsterdam. The Austrian architect Friedrich Grünanger designed it.

This Bulgarian synagogue is located in the very center of Sofia, a few meters away from the busy Women’s Market, right behind the Market Hall and very close to Banya Bashi Mosque, which was there first. In fact the mosque was completed in 1576, or 333 years earlier than this latest version of the synagogue.

Since 1955, Sofia Synagogue has been part of Bulgaria’s national list of important cultural relics. The communist regime placed it on that list, even though its relations to the Jews were ambivalent, to say the least.

The architectural style of Sofia Synagogue is actually a mix. Oriental elements were merged with Viennese and Venetian styles. “Bulgarian national romanticism” is the term used to combine all of those blends.

Floral and other geometric motives can be seen on the outer walls. The main hall is 31 meters high and has a diameter of 20 meters. On the synagogue’s small towers and domes, a total of twelve Stars of David were installed.

Inside, this temple is crested with pillars made out of marble, Venetian mosaics and wooden carvings. The impressive chandelier contains 65 lamps, 440 colorful pieces of glass and as many as 500 Stars of David. There are even more stars, but regular ones, painted on the ceiling.

Sofia Synagogue can accommodate more than 1,000 people. This includes the balconies along with the main prayer hall. But most services are being attended by far less people, because Bulgaria’s Jewish community is small, especially since 1948 and the following years, when 48,000 Jews made Aliyah while only a few thousand stayed in the country.

But for high holiday services, or the traditional Hanukkah event, far more people show up. Even the President of the Republic of Bulgaria comes along for that one every year. It is a tradition.

Also, quite a few tourists visit Sofia Synagogue, which is open for that purpose six days per week, from Sunday to Friday. These visitors include Israelis, some with Bulgarian roots, Americans, Britons, Germans, and both Jews and non-Jews from many other countries.

The construction of the new Sofia Synagogue, 109 years ago, was part of the efforts to reorganize the Jewish community in Bulgaria. Rabbi Marcus Ehrenpreis, as well as Ezra Tadjer and Abraham Davichon Levy were the men who pushed the project forward.

An old synagogue, named Synagoge Ahava and Chesed (Love and Graciousness), used to stand at the very same spot. It had been built after 1826. That year, Bulgaria was still under Ottoman rule. Back then, Sultan Mahmoud II permitted non-Muslim communities to build their own temples.

In 1878, when Bulgaria became independent again, there were as many as four synagogues in Sofia. Three of them disappeared when Mayor Dimitar Petkov wanted to rearrange Sofia, towards the end of the 19th century.

Sofia Synagogue was not really in service during communist times. The regime in Sofia did have damage repaired after a major earthquake in 1977. But a necessary restoration did not take place.

From the end of World War II in 1945 to the collapse of communism in 1989, the synagogue was basically a construction site, in the sense that the building was not in an appropriate state for Shabbath or high holiday services.

To the communist leadership that aspect came in handy, since practicing religion, including this one, was not encouraged. The opposite was the case.

In 2008, Sofia Synagogue’s most recent big renovation took place. Recently, in 2017, the roof was repaired.

At the last huge event at Sofia Synagogue, President Roumen Radev joined the Jewish community for their Hanukkah event in December of 2017.

A big international event is scheduled for March 10th, 2018. On that day, the new book “Bulgarian Jews: Living History” will be officially released. Guests from Israel and the United States will be there, including Ronald Lauder, the President of the World Jewish Congress and founder of the Ronald S. Lauder Foundation.

The book will be available at Shalom in Sofia, at the synagogue itself and at Amazon Europe. And it will contain information about Sofia Synagogue, the place to be.

Bulgarian Jazz Masters: Among the Best in Europe