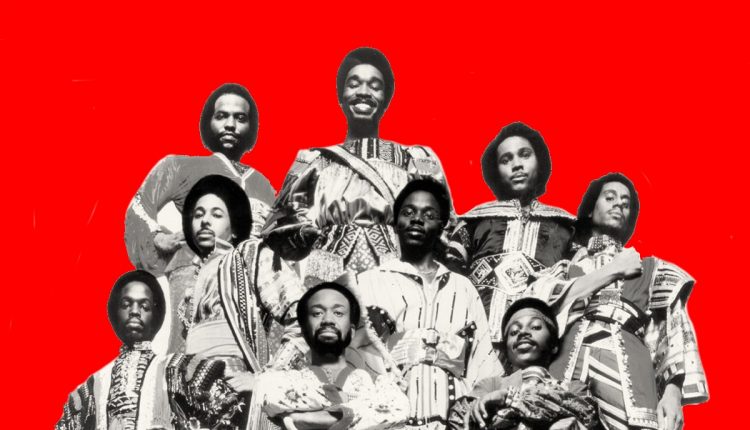 Earth, Wind & Fire was a crazy band name, when founder Maurice White came up with it in 1970. The project itself was the implementation of a big idea. And a labor of love.

They are the band which achieved so much, including setting the quality bar so high hardly anyone else has reached it until today. What they delivered, especially during their best times between 1975 and 1981, was simply brilliant.

“That’s the Way of the World” was an album which amazed millions, with energetic Funk songs such as “Shining Star”, or World Music tunes which connected sophisticated American Jazz-Funk with African and Latin sounds, such as “Africano”. “All About Love” is one of the most beautiful ballads ever. “Reasons” became a big hit.

When, after two more albums, “All ‘N All” was released in 1977, the direction Earth, Wind & Fire would take became apparent. This album contained “Fantasy”, an eternal hit, which is still being played today, as if it had been introduced just yesterday.

“Love’s Holiday”, sung by Maurice White himself, is just too beautiful to describe. So is “I’ll Write a Song For You”, sung by Philip Bailey, while “Runnin'” took Jazz-Funk to a new level. Those arrangements, those horns, the warmth and the energy were now trademarks of what had become the best band in the world.

“Diana”, yet another stunning tune, was supposed to make it on the “I Am” album, but didn’t. It was released on a sampler years later. This of course leads to a good question: What other tunes, recorded during those times, which did not make it on those albums, might be sitting in their archives? What about it, Verdine? How about a “The Lost Tunes” album?

“After the Love Has Gone”, a tune absolutely everyone knows, was part of “I Am”. This one may not have been a true Earth, Wind & Fire song, due to the fact that it was written by David Foster, Jay Graydon and the band Chicago’s Bill Champlin. On the other hand it was, because of the style they gave this one, and since nobody in the world could have sung it the way Maurice White did.

This song achieved something no other tune had achieved before: It was played all over the airwaves, including on Soul and Pop radio stations. In blunt terms: Predominantly white listeners, who were into high quality Pop music, called AOR at the time, loved “After the Love Has Gone” too. And via this song millions of them finally got into the rest of what Earth, Wind & Fire delivered.

The “Faces” album deserves one word which should never be used in articles about bands, under normal circumstances: Perfection. Hell! The title track demonstrated what this band was really about, tunes like “And Love Goes On”, “Turn It Into Something Good” or “Win Or Lose” were just too brilliant to be real.

So were the ballads, including “Take It To the Sky”. Another one, called “You”, is simply the most beautiful love ballad of all time. Period.

Their next two releases were brilliant too. Afterwards, they tried sounding like others too hard. That syndrome started with their “Electric Universe” album.

The times were changing. In the music world, the quality aspect should never have become less important than the coolness aspect, or the tits and ass aspect, but it did. Turning to the best band ever did not help either, since they tried to adapt, which in the eyes of some was a mistake.

During the best times of Earth, Wind & Fire, the greatest side projects surfaced. Philip Bailey sang “Deja Vu” with the band of percussion hero Paulinho Da Costa in 1979. Holy cow! What a killer Funk tune!

Maurice, Verdine and other members continued working with Ramsey Lewis, whose Fusion and Jazz-Funk phase was, and still is, fascinating.

Maurice also worked with The Emotions. That cooperation led to songs which demonstrated the brilliance of Earth, Wind & Fire’s approach with the unbelievable voices of those gifted ladies.

“Feel My Soul”, an underrated album by one of the greatest voices of all time, Jennifer Holiday, was produced by Maurice White. Whoever listens to the last third of the song “I Am Ready Now” will hear some killer sounds delivered by the Phoenix Horns.

Earth, Wind & Fire were drowned in deserved prizes, including American Music Awards and Grammy Awards. Yes, back then quality was rewarded. If they sold time machines at Walmart, we should all get one and travel to Rio de Janeiro in the year 1980. Why? Because that year this band performed the most brilliant gig down there. Two words: “Rock That!”.

Here we are, in 2018. Today, the original band around Verdine White, Philip Bailey and Ralph Johnson is still very active. The setting and the approach are different though.

And there are side products. The most prominent one is a group called The Al McKay Allstars. They are taking their “Earth, Wind & Fire Experience” on stage, around the world, just like the original. Except they play smaller Jazz festivals and halls. Al McKay co-composed a lot, and was EWF’s guitarist during the best times.

So, how does the Earth, Wind & Fire fan base interact and follow the band? First of all, their very nice looking official website will show fans what in the hell the band is up to these days.

As it turns out, they will embark on yet another tour in March, which will take them from Tulsa to Napa Valley, all over this land called The United States of America. In July, they will sit on a steel bird, fly to Europe and invade open air festivals.

But there is more. Fans have created two very interesting EWF Facebook groups. Lyndell Jones and Cyndi Dewberry are running a group called “The Elements of the Universe: Earth, Wind & Fire” with 15,027 members.

In this group, fans post and discuss videos of the band’s live appearances, photos, tunes and rare clips, such as the band’s appearance in two 1980-s movies.

Of course these Facebook groups include all kinds of fans:

In “The Elements of the Universe” group, Robert just posted a great photo of Maurice and the guys which looks like it might have been taken in 1977. Other fans commented how they like that shot.

Kashan seems to be into the more electronic and hyper-commercial EWF sound of the 1990-s. He posted “System of Survival”. Patricia says she remembers “a nice dance routine we did off of this in college”.

There are posts with tunes from Maurice’s solo album, there is EWF art work created by fans, there are photos posted by proud fans who just purchased tickets for their shows, and discussions about set lists fans would create for concerts if they were EWF’s musical director.

Ulli Bauer, a beautiful blonde from Vienna, is one of the admins of another group called “The Official Earth, Wind & Fire Legacy Page”. She is very active, contributes truckloads of posts with video footage of gigs the band did 40 years ago, and lots of rare photos.

She also comments on other fans’ posts, welcomes new members and deals with issues. The biggest problem she has faced was a hostile takeover of that “Legacy” group by some idiot hacker. After that incident, Ulli Bauer did everything to recreate that Facebook group. She was successful.

“Most of our members have grown up listening to Earth, Wind & Fire’s music. So they are in their fifties, but we have a lot of young members too, who were ‘infected’ by their parents’ love for EWF”, Ulli says. “It’s like the typical EWF audience at concerts, from kids to 65-year-olds. We have members from all around the world, mainly the U.S., of course, but also Europe, South America and Japan.”

That aspect is important. Earth, Wind & Fire fans are a very international bunch. Still, across borders and even oceans, there is a sense of togetherness.

“The Official Earth, Wind & Fire Legacy Page” is actually official because it has active members who are very close to the band. One of them is Shelly Clark, Verdine’s wife. She contributes a lot, including nice shots of Verdine hopping on an elegant, black SUV, in order to get to some airport. Yes, duty calls quite often when your name is Verdine White.

Also Henry Soleh Brewer is an admin of this group. He knows the band, has worked with them, and he is a specialist for absolutely everything having to do with EWF.

These two Facebook groups are the best way to interact with like-minded people, who just can’t get enough of “Sparkle”, who need their daily portion of “Sunshine”, who can’t live without “See the Light”, or who need Philip’s brilliant solo tunes, such as “I Will No Wise Cast You Out”.

Exchanging covers of Earth, Wind & Fire tunes is something the fans use those groups for as well. Norman Brown and the Perri Sisters doing “Love’s Holiday”, Billy Cobham’s version of “Take it to the Sky”, Pieces of a Dream’s jazzy interpretation of “It’s All About Love” or Incognito’s take of “That’s the Way of the World”: There are countless interesting covers of EWF material.

Or how about ridiculing song titles? “Take it to the Dry Cleaners”, “I’ll Bite a Thong For You”, “Let’s Move our Kite”, you name it. Those groups are prefect for that kind of thing too.

Bulgaria: ‘Lukov March’ and the Definition of Antisemitism