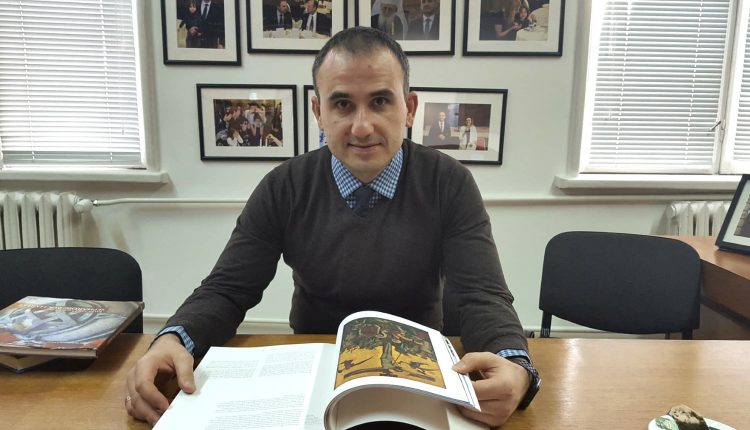 The organization of the Jews in Bulgaria, Shalom, has always been active. But recently, political decisions and other aspects have made life at the organisation’s headquarters in Sofia rather hectic. This will not change anytime soon.

Shalom just jump-started its largest project yet: A school, along with a kindergarten and a new community center will be built in 2018.

Dr. Alexander Oscar, who is an ophthalmologist in his other life, has been Shalom’s President for two years so far. He is the driving force behind many of the projects and initiatives.

Imanuel Marcus spoke to him in Sofia.

Magazine79: This year was a very active one, for you and your colleagues at Shalom. Which was the organisation’s biggest success?

Alexander Oscar: Throughout the year Shalom underwent a process of strategic planning which was extremely helpful both for the professional staff and the leadership. We managed to identify, with the help of our members, the right priorities which in turn gave us an idea how to distribute the available resources to successfully serve our mission as the largest representative organisation of the Bulgarian Jewish community. Our members have a clear vision what they want. Shalom needs to be a transparent, democratic, non-partisan organisation, committed to securing a safe and welcoming environment in a society which is becoming more and more divided. The importance of investing into the next generations through excellent formal and informal education can not be stressed enough. Keeping the traditions and memory of our predecessors alive is another priority, but also doing everything in our capacity to improve the society we live in, through the concept of “tikkun olam” (repairing the world). I am proud to see Shalom taking concrete steps to achieving sustainability in the very near future.

Magazine79: For the first time, Bulgaria got a national coordinator for combating anti-Semitism this year. Deputy Foreign Minister Georg Georgiev was nominated for this position. In what way were you part of the decision making process here?

Alexander Oscar: Shalom was in fact the first NGO to join the pan-institutional taskforce of the Bulgarian delegation to the International Holocaust Remembrance Alliance, headed by two of the most dedicated civil servants I have met in my life, Ambassador Plamen Bonchev and Ambassador Dimitar Mihaylov. Ever since this happened in 2016, we have been actively supporting the decision of Bulgaria changing its status at the IHRA from observer to liaison, which effectively happened in June 2017. This progress means more commitment on our part, especially in the field of Holocaust education at schools, the commemoration of the victims of the Holocaust and honouring those who stood up against the Nazis. So in a way, the adoption of the official definition of anti-Semitism and the appointment of a national coordinator in October seemed like the natural continuation, and another proof of how engaged the Bulgarian government is.

Magazine79: Why does Georg Georgiev’s job have such a significance? Is fighting anti-Semitism and prejudice important to the Jewish community only?

Alexander Oscar: We have emphasized on many occasions that anti-Semitism is not a problem of the Jewish community, it is problem of the Bulgarian society. It is Mr. Georgiev’s job, with our help, to create greater awareness about how dangerous anti-Semitic rhetoric and manifestations can be and why we should combat hate speech with all means at our disposal. My hope is that Mr. Georgiev will partner with the MPs and achieve some significant progress in passing legislation which would make denying the Holocaust and promoting Nazism punishable by effective sentences.

Magazine79: Shalom started a rather large project this year. You are actually in the process of building and setting up an “educational project”, which will include a school, a kindergarten and even a new community centre. What can you tell us about this? How far have you gotten so far?

Alexander Oscar: On this particular project we are extremely lucky to partner with two of the most notable Jewish international organizations: The Ronald S. Lauder Foundation and The American Jewish Joint Distribution Committee. On the Bulgarian side, our efforts are largely supported by the Sofia Municipality and the Ministry of Education. The success story of the 134th Dimcho Debelyanov School in Sofia, commonly referred to as “The Jewish School”, gave us courage that we can provide high-end education on a bigger scale. A Jewish community needs two things to thrive: a school and a synagogue. Learning is one of the most respected and universally known Jewish values. It is an entirely new field of expertise for our organization, but we have gathered a team which has the knowledge and the enthusiasm to see this project successfully completed and very soon. By the start of the academic year 2019/20, Sofia will hopefully have a functioning Jewish school for the first time since World War II.

Magazine79: Israel was targeted again in 2017. The fact that Iran has been threatening the Jewish state, was not surprising at all. But at the United Nations, lots of weird condemnations were approved. The UN accused the country of absolutely everything, including being responsible for domestic violence in Palestinian families in Gaza. On the other hand, the US officially recognised Jerusalem as Israel’s capital. Was this a good year for Israel, or a bad one?

Alexander Oscar: Shalom is the organization of the Jews in Bulgaria and as such we are primarily focusing our scope of activities on what’s happening in the country. Naturally, the situation in Israel is always a concern for us. All of our members have family there and we are closely following the recent developments. It was a turbulent year for Israel, with many disputable resolutions by the UN and UNESCO which raise the question to what extent the international community is willing to impartially facilitate the peace process in the Middle East. Shalom has welcomed Jerusalem’s recognition by US President Donald Trump and so has the Jewry in all parts of the world. All of this only confirmed the millennia-long historical relationship between the Jewish people and the Holy City of Jerusalem.

Magazine79: There is something Shalom has been trying to do for a while, which is banning the Lukov March in Sofia, or making sure it does not take place, since it has actually been banned before. What do you think should happen in this regard? And what do you expect to happen?

Alexander Oscar: For the first time, we joined forces with the World Jewish Congress this year and launched a worldwide campaign to ban the Lukov March. So far, the petition has been signed by more than 30,000 people and it was delivered to Prime Minister Boiko Borissov. We are working closely with other human rights platforms, like the website Marginalia and Internet Society, to educate people, including journalists, opinion- and decision-makers, as to why having a neo-Nazi rally in a capital city, which will host the Presidency of the European Parliament for the first time, is a very bad thing. None of this would be possible without the unwavering support of Mayor Yordanka Fandakova. So, I would say, the eventual success of our efforts will not only be an effective ban of the Lukov March, but achieving understanding within the civil society how detrimental and shameful this event is for any democratic, tolerant and inclusive country.

Magazine79: On May 4, 2018, Roger Waters will perform at Arena Armeets in Sofia. He is one of the leaders of the so-called BDS-movement, which many view as anti-Semitic. What are your thoughts on this scheduled concert?

Alexander Oscar: Luckily, with very few exceptions, Bulgaria hasn’t experienced BDS campaigns like many Western countries. Israel and Bulgaria have enjoyed excellent bilateral relations, especially in the last decade, and I can safely say there are very few anti-Israeli sentiments among the Bulgarian people. Roger Waters is a well-known musician here and I like to think that if Arena Armeets is filled with people, it’s because they like and relate to his art and not his political convictions.

Magazine79: Bulgaria’s new President Roumen Radev came to the Hanuakkah Celebration at the Central Synagogue in Sofia the other day. What did you think of his speech?

Alexander Oscar: The Jewish community was very honoured that President Radev continued the tradition of his predecessor in lighting the candles for Hanukkah. His speech was incredibly insightful and on point. He has a very clear idea about the possible dangers of extreme nationalist and extremist political perceptions, and the threat imposed by the attempts of historical revisionism. I completely agree with Mr. Radev that our greatest miracle of living together in peace, reciprocity, and understanding is in our hands. It is my firm belief that the President’s institution will stand behind us in our combat against extremism and radicalization of society. This country is home to all of us and it is our duty to find the best way to live together in peace and with mutual respect for each other.