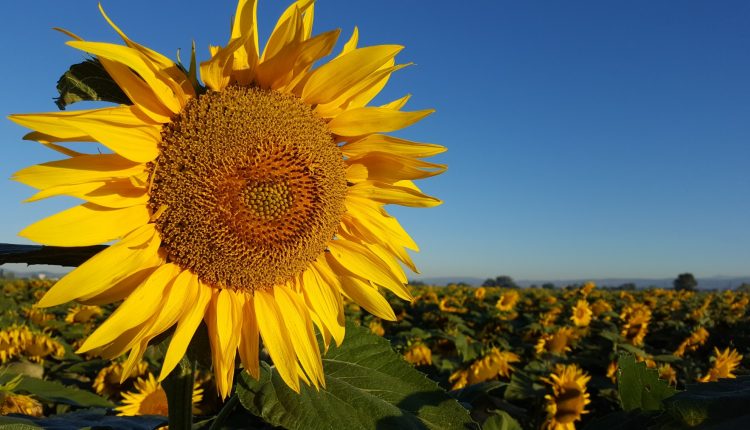 The Sun is our star. According to Wikipedia, it is “a nearly perfect sphere of hot plasma, with internal convective motion that generates a magnetic field via a dynamo process.” Whatever. We like it, while tanning our skin on beaches, or while taking photos of sunflowers at 06:00 a.m. in late July. Yawn.

Sunflowers, on the other hand, were named after our star. They are pretty, they don’t talk much, they love staring at the Sun, and they are very photogenic, especially when that star of ours hasn’t dried and burned them too much yet.

We live in Sofia. Our genius idea was to get up at 05:00 a.m., drive to the north-western edge of the Bulgarian capital and shoot those damned flowers while the star rises in the East. At 05:30 a.m., in the dark, there were quite a few vehicles on the streets of the city. They were probably trying to escape while it was still cool.

In no time, we reached a sunflower field behind Sofia’s West Park and Fakulteta, the big Roma slum. We waited for the star to rise behind the mountains, which was when our problem arose: Most flowers were burnt, dry and not even yellow anymore. We shot them anyway.

At 07:00 a.m., we reached another large sunflower field next to road no. 8, outside the village of Bozhurishde. Over there, the situation was a lot better. A small, paved road actually took us right into that field. That way, we had some face time with many of the Helianthus.

Considering we are amateur photographers, the outcome was pretty damn good. Now, we will have to sleep and snore some more.