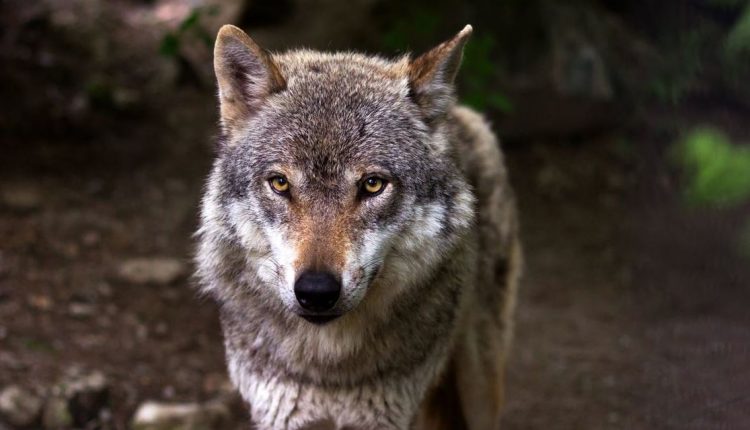 Wolves are fascinating animals. People fear and some hate them, hunters shoot them, farmers want to protect their livestock against them. On the other hand, they are being loved, admired for their intelligence and beauty, and they are even part of fairytales.

In ‘Little Red Riding Hood’, a wolf eats the grandmother, who will be cut out of its belly at the end of the story. But varying that story by the Grimm Brothers might make it less scary for small children. The wolf carries the girl’s basket and shows her the way to granny’s house. That version is easier to digest. Literally.

Wolves fight their way back into life when are are extinct. This happened in Germany, where none had been seen for about a century, until 1998, when a pack or two from Poland must have crossed the border into Germany. Today, some 150 wolves live in forests in Eastern and Central Germany, in 26 packs.

It is mostly good that they are back. But their number in Germany is almost ridiculous compared to the 2,000 wolves living in Spain, the 2,000 in the forests of Belarus, or those living in the two other European strongholds for wolves. They are Bulgaria and Romania.

In Romania, the wolf population is 2,500, the largest in Europe, while the estimate in Bulgaria is 1,000 to 1,200 animals. In those two countries, the wolf never died out.

What their distribution in Bulgaria is concerned, the density is highest in the south-west, along the Macedonian border. In some areas, there were 10 to 15 wolves per 100 square kilometers 20 years ago, in others 1 to 5, according to the Balkans Wildlife Society.

Most wolves in Bulgaria can be found in the Balkan and Rila mountain ranges, roaming the forests, hills and mountains. And they are in danger. According to experts and NGOs, the Bulgarian Lupus needs all the protection it can get.

The German EuroNatur Foundation runs lots of projects, especially in Eastern Europe. They fight for eco systems of all kinds, including Bosnian rivers and primeval forests in Romania. But they help the Bulgarian wolf too, in cooperation with Bulgarian partners.

To be precise: EuroNatur is working on what they call a wolf management plan. According to the organisation, the wolf population in Bulgaria is under pressure. The NGO says the Bulgarian authorities allowed the shooting of “an irresponsible number of wolves”, believing the wolf population was a lot greater than it actually was.

That so-called wolf management plan is supposed to be put in place in cooperation with the Ministry of Environment and Water in Sofia, the local forest authorities and scientists. EuroNatur wants a “conflict-free coexistence of wolf and man”.

In order to achieve that, the NGO intends to create reliable databases regarding the distribution of wolves in Bulgaria and step up surveillance and research. Their goal is to stabilise the wolf population by implementing awareness campaigns, by “creating wolf acceptance” and by making sure the problems of farmers with their livestock are being taken seriously.

Regarding the latter issue, EuroNatur says it had already been able “to contribute significantly to a reduction of conflicts between livestock farmers and wolves.”

Like environmentalists, photographers love wolves. But it is not easy to come across those beautiful animals, since they tend to be shy. On the other hand, they can be pretty dangerous, on those rare occasions when they are close. That is why there is a service called wolf watching, which includes wolf photo ops, in Bulgaria.

‘Wild Echo’ is some kind of a travel agency for animal lovers with cameras, which organises a lot of bird watching tours in Bulgaria. For customers with stiff necks, they have wolf watching. For that purpose, they even built a comfortable hideout, in which adventurers can hold their Nikons or Canons all night long, if they wish. Wolf sightings are not guaranteed, but likely. When they occur, the finger should already be on the release button.

Experts say wolves are similar to humans, even more than apes, because of their behaviour. They look after the elderly, the entire family helps bringing up the kids, and they even sing, or howl together, just like us.

The German author Elli Radinger, who has watched and studied wolves for thirty years, mostly in the United States of America, just released her book ‘Die Weisheit der Wölfe’(‘The Wisdom of Wolves’). She told the German yellow press publication ‘Bild’, she had learned a lot by hanging in there, at -40 degrees Centigrade. Her rewards were some ten thousand wolf sightings.

Elli Radinger has written countless books about wolves before, all in German. Those include ‘The Wolves of Yellowstone’, ‘Living with Wolves’ and ‘The Winter Wolf’. She told the German daily, by researching and watching wolves, she had learned to look at the world with different eyes. “By observing wolves, we can learn a lot about our lives.”

After the first version of this article was published this morning, its author asked expatriates living in Bulgarian villages about wolf sightings. In social media forums, many of them said they had indeed seen wolves. In some cases the animals had come into their villages or gardens. Several British expats complained about hunters in Bulgaria. “I don’t think they will survive long in Bulgaria”, a lady said. “Every weekend the hunters come to our village and always leave with a dead one tied to their bumper. So cruel.”

The Black Sea: A Threat to Public Health