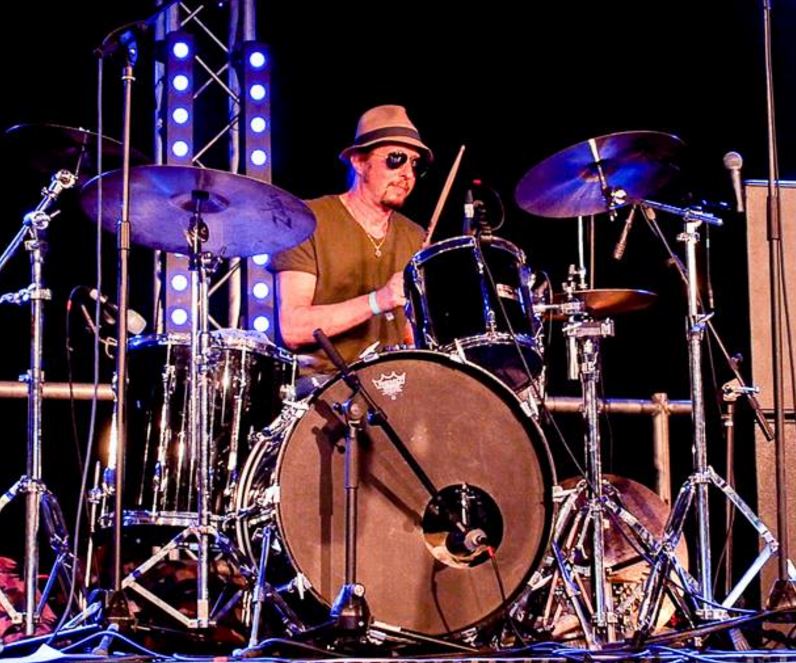 A tight groove specialist and multi-instrumentalist, who has played with several of Britain’s main “Acid Jazz” acts, including Jamiroquai, and who performs and records with his own projects, is celebrating a funky 52nd birthday today: Nick van Gelder.

As a 6-year-old, he got a snare drum, which was pretty well equipped: “It had a cymbal arm”, van Gelder says. He had to wait another couple of years, until he was finally sitting behind his first complete drum set, on Christmas Eve of 1972, and another six years, until he had a “proper” one. That was at high school, when Nick was 14. “It was a blue pearl wrap Edgeware kit”.

His early influences? The Beatles, Stones, Hendrix, even Bowie and, of course, Santana. “Then I discovered the Average White Band live”, he says. AWB’s drummer Steve Ferrone was a mayor influence, since that guy definitely knows how to groove. Stewart Copeland of The Police was another drummer Van Gelder paid a lot of attention to, back then in the days.

It was in 1980, when he co-founded the Ozric Tentacles, and act described as a cult “space Rock band”. Their tunes were instrumental. Providing the beats on this far out band’s first five albums, turned out to be “a valuable experience”. Then he moved on to The Sandals, as a guitarist. With that “Acid Jazz” group, Nick toured Europe extensively.

The next "Acid Jazz" act was just around the corner. In 1991, Nick van Gelder was introduced to a young vocalist by the name of Jay Kay. They founded Jamiroquai, the most successful Jazz-Funk act since Earth, Wind & Fire. “When You Gonna Learn” was recorded in 1992. After a showcase gig at the Jazz Café in Camden (London), Jamiroquai was part of Sony’s s2 label.

On Jamiroquai’s first album, Nick Van Gelder played drums and guitar. He also co-wrote “If I Like It, I Do It”. The album, which included “Too Young to Die” as well, spread around the world quickly, bringing British Jazz-Funk to millions. With Jamiroquai, Nick Van Gelder toured like crazy, until he left the band, while they were in the studio, recording the “Return of the Space Cowboy” album.

But he was not going to waste any time. Almost immediately, he co-founded the next “Acid Jazz” band. Akimbo also included Simon Bartholomew of The Brand New Heavies. The “On Top” album they recorded was just as funky as their killer gigs at festivals and Ronnie Scott’s venue in London.

With Keb Darge, Nick went on to found the independent record label Deep Funk Records, on which he co-produced countless albums, with vocalist Mazen, Jessica Lauren, FBI, Raw Deal and many more, while touring and gigging with absolutely everyone in Britain’s Real Music scene.

It was 2008, when Nick van Gelder released “Choose Music”, his debut solo album. The word solo is more than appropriate here, since he played all instruments himself, except for the horns, while composing and producing everything. Mazen and the three-piece Stella Horns group supported him.

“Groovitas” followed in 2012. Supported by Mazen and others, Nick van Gelder delivered yet another funky, partially clubby and fascinating album, which includes loads of good stuff, including the brilliant tune “Afro Infusion”. The latest release to date is “Loveland”, which van Gelder recorded with vocalist Sulene Fleming on his new label VeeGee Records. That album contains stunning Funk ballads, with a lot of tight grooves, van Galder style, and Sulene Fleming’s stunning voice.

In between, Nick van Gelder kept on touring with other acts, including Incognito, in 2013.

It gets even better: “There unreleased material in the pipeline”, Nick says, hinting that we can expect a lot more. Today, the man who plays it all, drums, bass, guitar and keyboards, the groove hero, who enjoys touring, but also working alone, is hopefully partying hard. Thanks to artists like him, Jazz-Funk is very much alive and kicking. Since the early 1980s, it’s not the Americans anymore, who deliver it, but the Brits. Nick: “The U.S. own Jazz-Funk, but the U.K. has the lease!” Amen.